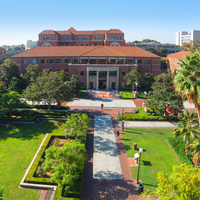 The museum’s historic building has served as a center for art, culture and learning in Pasadena since its construction in 1924 by pioneering collector and entrepreneur Grace Nicholson (1877-1948) as her residence, galleries, and Treasure House/emporium. Ms. Nicholson’s championing of Asian art early in the century set the tone for much of the Pasadena community’s arts-related activities during the ensuing decades. The building also served as the site of the Pasadena Art Museum, which was renowned for its groundbreaking exhibitions of contemporary art. Pacific Asia Museum combined the spirits of both its predecessors in its focus on the classic and contemporary arts of Asia and the Pacific Islands. In 2013, University of Southern California partnered with the museum to form USC Pacific Asia Museum. The affiliation broadened the community that benefits from the museum’s role as a vital resource for education and cultural heritage, and expanded the audience interested in a dialogue about art, history and culture.

Support from the museum’s constituent communities has enabled the collection to grow to more than 15,000 objects, spanning more than four thousand years and the region extending from Persia to the Pacific Islands. The museum fulfills its mission by organizing and presenting exhibitions, performances, lectures, classes, workshops, and festivals, all drawing on the arts and cultures of Asia and the Pacific Islands. These programs provide quality arts programming and education to children and families, ensuring greater access to the arts for area residents and nurturing new audiences.

In its brief history, the museum has organized and presented a number of groundbreaking exhibitions, including the first North American exhibitions of contemporary Chinese art after the Revolution and the first exhibition of Aboriginal art in the United States. Exhibitions originated by the museum have traveled across the country and to Japan. The museum is also committed to scholarship and has produced more than 50 exhibition catalogues.

Join us in celebrating Valentine's Day with a hands-on Ikebana workshop where you will learn to create an elegant floral arrangement inspired by the...

Dismantling Orientalism: This Is Not a True Story

Dismantling Orientalism: This Is Not a True Story Reception to follow. ADMISSION: Admission is free. Reservations required. RSVP beginning Wednesday,...

Conversation@PAM: Gallery Tour of AFTER...