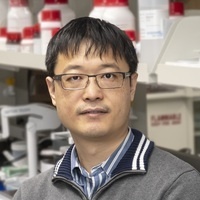 Innate reflexes are mediated by hardwired circuits in subcortical structures such as the brainstem. Nevertheless, mounting evidence has showed the neocortex can profoundly impact the performance of these stereotyped responses. However, little is known about the circuit mechanisms underlying this cortical function. To study the potential mechanisms, we have been using the optokinetic reflex (OKR), a fundamental innate behavior for gaze stabilization. While this reflex is mediated by the complex of the nucleus of optic tract and dorsal terminal nucleus (NOT-DTN) in the brainstem, it can also be influenced by the visual cortex. In this talk, I will touch upon a few fundamental questions related to the cortical modulation of OKR behavior. For example, what pathway is required for this cortical function, what information is carries by this pathway, and how its activity leads to the plastic change in the OKR. By answering those questions, we will shed light on the functional contribution of cortical input to the brainstem mediated functions.

Department
Keck School of Medicine
Add this to your calendar