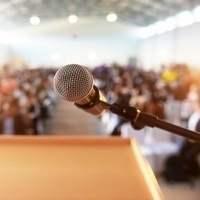 No matter your industry, we'll all find ourselves in a position of having to pitch at some point in our career. Whether it's pitching a startup idea, pitching ourselves at a networking event or pitching our boss for a promotion, the ability to pitch is a professional necessity. At "Perfecting the Pitch", you will hear experts on the various types of pitches people encounter in their careers to give tips and live demos. The event will also feature an opportunity for attendees to pitch themselves and receive feedback from the experts.

Chen is a cross cultural communication enthusiast and has built an effective communication model for non-American and American employees through personal branding training and recognition of cultural dimensions such as individualism vs collectivism. Bilingual and bicultural, she helmed the launch of 10+ social monetization apps for celebrities and brands such as Grammy-nominated musician Trey Songz (8.7 instagram followers), Toni Braxton, and Inked Mag. Chen holds a master's degree from USC Annenberg School of Communication.

Love's entrepreneurial spirit and passion to cinema have served as a driving force in countless projects. He was the associate producer for a 2009 PBS documentary called Jail, No Bail that received an Emmy-nomination for the southeastern region. In 2010, Love produced Saved, which was accepted into the 2010 Cannes Film Festival’s short film corner. Over the next few years he continued to “learn by doing” while working for Rainforest Films, Sony Pictures, The Mark Gordon Company, Martin Chase Productions, Disney ABC, NBC Universal, and HBO Films. Love is a graduate of the Peter Stark Producing Program at USC.

As Senior Associate at Sway Ventures, Brett Munster’s responsibilities include evaluating investment opportunities, coordinating the investment and due diligence process and managing the growth of existing portfolio companies. Brett’s experience as a two-time entrepreneur and former operations executive has given him deep operational experience in early stage and growth phase companies. Prior to joining Sway Ventures, Brett ran day-to-day operations for AMO, a loss mitigation company, where he oversaw a portfolio of distressed assets that grew to $2.25 billion. Brett began his career at zAthlete.com, a sports social networking website that he launched during his final semester at UC Berkeley and sold in 2009. Soon after, Brett launched his second start-up Visual Icon, an online platform aimed at streamlining the film clip licensing process.

Department
Career Center
Add this to your calendar