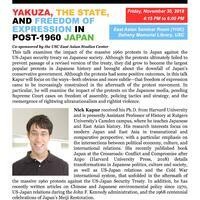 Yakuza, the State, and Freedom of Expression in Post-1960 Japan (USC CJRC)

This talk examines the impact of the massive 1960 protests in Japan against the US-Japan security treaty on Japanese society. Although the protests ultimately failed to prevent passage of a revised version of the treaty, they did grow to become the largest popular protests in Japanese history and brought about the downfall of Japan’s conservative government. Although the protests had some positive outcomes, in this talk I will focus on the ways—both obvious and more subtle—that freedom of expression came to be increasingly constrained in the aftermath of the protest movement. In particular, I will examine the impact of the protests on the Japanese media, pending Supreme Court cases on freedom of assembly, policing tactics and strategy, and the reemergence of rightwing ultranationalism and rightist violence.

Bio
Nick Kapur received his Ph.D. from Harvard University and is presently Assistant Professor of History at Rutgers University’s Camden campus, where he teaches Japanese and East Asian history. His research interests focus on modern Japan and East Asia in transnational and comparative perspective, with a particular emphasis on the intersections between political economy, culture, and international relations. His recently published book Japan at the Crossroads: Conflict and Compromise after Anpo (Harvard University Press, 2018) details transformations in Japanese politics, culture and society, as well as US-Japan relations and the Cold War international system, that unfolded in the aftermath of the massive 1960 protests against the US-Japan Security Treaty. In addition, he has recently written articles on Chinese and Japanese environmental policy since 1970, US-Japan relations during the John F. Kennedy administration, and the 1968 centennial celebrations of Japan’s Meiji Restoration.

This event is co-sponsored by the USC East Asian Studies Center.