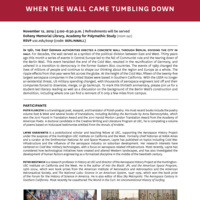 In 1961, the East German authorities erected a concrete wall through Berlin, dividing the city in half. For decades, the wall served as a symbol of the political division between East and West. Thirty years ago this month a series of events in Central Europe led to the fall of Communist rule and the tearing down of the Berlin Wall. This event heralded the end of the Cold War, resulted in the reunification of Germany, and ushered in a transition to democracy in the former Eastern Bloc countries. The events of 1989 changed the lives of millions of people and continue to shape our thinking about the region and Europe as a whole. The ripple effects from that year were felt across the globe. At the height of the Cold War, fifteen of the twenty-five largest aerospace companies in the United States were based in Southern California. With the USSR no longer an existential threat, US military spending changed, with thousands of aerospace engineers laid off and their companies forced to downsize, merge, or go bankrupt. To mark this thirtieth anniversary, please join us for a student-led literary reading as well as a discussion on the background of the Berlin Wall’s construction and demolition, including where one can find a remnant of it only a few miles from campus.

PIOTR FLORCZYK is a translingual poet, essayist, and translator of Polish poetry. His most recent books include the poetry volume East & West and several books of translations, including Building the Barricade by Anna Świrszczyńska, which won the 2017 Found in Translation Award and the 2017 Harold Morton Landon Translation Award from the Academy of American Poets. A doctoral candidate in the Creative Writing and Literature Program at USC, he is completing a volume of poems based on Holocaust testimonies entitled From the Annals of Kraków.

LAYNE KARAFANTIS is a postdoctoral scholar and teaching fellow at USC, supporting the Aerospace History Project under the auspices of the Huntington-USC Institute on California and the West. Formerly chief historian at NASA Ames and a curator at the Smithsonian National Air and Space Museum, Layne has published on topics including Cold War infrastructure and the influence of the aerospace industry on suburban development. Her research interests have centered on Cold War military technologies, with a focus on aerospace-related infrastructure. Most recently, Layne has considered how technological initiatives have created and altered Western landscapes, and has also investigated the development of human factors engineering as a formalized discipline in the middle of the twentieth century.

PETER WESTWICK is a research professor in history at USC and director of the Aerospace History Project at the Huntington- USC Institute on California and the West. He is the author of Into the Black: JPL and the American Space Program, 1976–2004, which won book prizes from the American Institute of Aeronautics and Astronautics and the American Astronautical Society, and The National Labs: Science in an American System, 1947–1974, which won the book prize of the Forum for the History of Science in America. He is also editor of Blue Sky Metropolis: The Aerospace Century in Southern California. Most recently he coauthored The World in the Curl: An Unconventional History of Surfing.