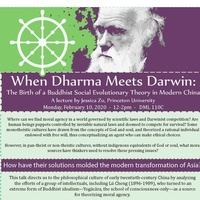 When Dharma Meets Darwin: The Birth of a Buddhist Social Evolutionary Theory in Modern China

Where can we find moral agency in a world governed by scientific laws and Darwinist competition? Are human beings puppets controlled by invisible natural laws and doomed to compete for survival? Some monotheistic cultures have drawn from the concepts of God and soul, and theorized a rational individual endowed with free will, thus conceptualizing an agent who can make ethical choices. However, in pan-theist or non-theistic cultures, without indigenous equivalents of God or soul, what moral sources have thinkers used to resolve these pressing issues?

How have their solutions molded the modern transformation of Asia?

This talk directs us to the philosophical culture of early twentieth-century China by analyzing the efforts of a group of intellectuals, including Lü Cheng (1896-1989), who turned to an extreme form of Buddhist idealism—Yogācāra, the school of consciousness-only—as a source for theorizing moral agency.