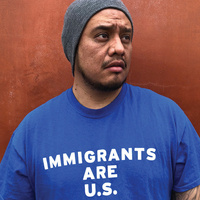 WET: A DACAmented Journey
A Performance by Alex Alpharaoh

WET: A DACAmented Journey is the story of what it means to be an American in every sense of the word except one: on paper. Chronicling Anner Cividanis’s journey living his whole life in the United States as an undocumented American, the solo performance by Alex Alpharaoh captures the desperation that DREAMers feel when forced to navigate a broken U.S. immigration system with very limited options, and examines the mental, emotional, and psychological hardship one man has to endure in order to secure his livelihood in Los Angeles, the only home he has known.

USC students are also invited to attend a special pre-show dinner featuring foods from several of Los Angeles' immigrant communities and conversation led by USC faculty and guests.  Further details are available at the RSVP page.

Bio:
Alex Alpharaoh earned his reputation as an emcee and spoken word artist by honing his skills in Los Angeles outlets such as KPCC’s Unheard LA as well as venues around the country, including New York’s renowned Nuyorican Café. The award-winning performer is also the founder and creator of SP!T: Spoken Word Theatre, a Los Angeles–based ensemble that combines hip hop culture, spoken word, acting, and dynamic movement to tell original stories centered around societal issues with the city of Los Angeles as the backdrop.

Presented by USC Visions and Voices: The Arts and Humanities Initiative. Organized by Diane Winston (Communication and Journalism). Co-sponsored by La CASA.