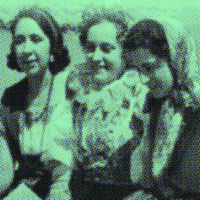 Please join ICW and CCI at the third Western Histories in the Making. Three graduate students will present their work and their research paths to continue fostering a connection between ICW and Doheny Library. All are welcome.

"At the Corner of Glenoaks and Arroyo: Collectivism and Cultural Hybridity at the San Fernando Swap Meet "

By the mid 1980s, the swap meet industry reached its height as a cornerstone of Southern California’s LatinX immigrant and working class communities. Swap meets became a viable source of income for newcomers and helped them build social networks. Less than a decade later, swap meets faced racist attacks. Cities permanently closed locations. The mainstream media emphasized crime rates and counterfeit goods. Yet swap meets have persisted. Their resemblance to the pre-Hispanic tianguis market, affordable prices, and familial atmosphere continue to attract millions of vendors and shoppers each year. In this case study of the San Fernando Swap Meet, Brown-Bernstein demonstrates that swap meets are an enduring space of class solidarity and cultural hybridity.

On a January afternoon in 1932, a multiracial assembly of Los Angeles residents gathered in Boyle Heights to dedicate a new building as a tribute to the city's international character and progressive spirit. For nearly two decades, social workers at the International Institute of Los Angeles had served thousands of immigrant women from their perch on the city's eastside. The organization's new Spanish Colonial Revival structure reaffirmed its vow to fashion worthy citizens and to model inter-group cooperation. Laura Dominguez's work explores how this understudied group of reformers policed the borders of Anglo settler imaginations in Progressive-Era Los Angeles and contemplates the built legacy of Americanization in the city today.

Kazuko Hata wrote to his friend and fellow-farmer, Don McDonald, requesting his help in locating belongings left behind in Wapato, Washington. Mr. Hata sent the letter from Heart Mountain, Wyoming on May 4, 1943, just a few short months after his family and neighbors were evacuated from the Yakima Valley. Mr. Hata’s letter is one of 57 that McDonald’s family kept in their family archive. In the span of four years, McDonald received and responded to dozens of individuals as they requested favors, inquired about the harvest, and negotiated the use of their place of worship, the Yakima Buddhist Bussei Kaikan. Rather than read the letters through the logics of resistance or agency, which has the potential for a contrary read of defeat or passivity, I read these letters to illuminate the performance of requesting, or in other words, the ways in which Japanese individuals utilized their connections to allies to make their requests known, express their desires, and advocate for their needs.