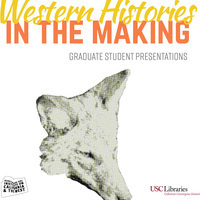 Please join ICW and CCI at a brown-bag lunch of Western Histories in the Making. Three graduate students will present their work and their research paths to continue fostering a connection between ICW and Doheny Library. All are welcome.

Harvesting Winter – The Natural Ice Trade in the American West

Jordan Keagle's research ties together two broad narratives, the “conquering” of the Western environment and the rise of capitalism, by examining a curious commodity: ice. Specifically, his work reconstructs the natural ice industry in the Pacific West in the nineteenth century. In his presentation, Keagle will argue that ice was itself a critical raw material in the building of the West—one that has been so far overlooked despite its interconnection with other industries and products. His paper illustrates the opportunities the ice trade offered consumers and the lengths to which Westerners went to obtain a measure of control over their environment.

Go After the Boys: The Spanish American Institute and Ethnic Boundary-Making in Early Twentieth Century California

Religious-based Americanization projects helped create the boundaries of an ethnic identity based on Anglo-Protestantism in early twentieth century American history. Although Americanization projects have largely been seen as imposed on communities of color Navarette Hunter's paper will show how Mexican families engaged in the process of ethnic boundary-making when sending their boys to the Methodist-run Spanish American Institute, a boarding school for Mexican boys, in Gardena, California. By looking at parental engagement in records archived at The Huntington Library, alongside publications produced by the boys at the institute archived at Doheny Library, this paper shows the dynamic process of identity and boundary-making and the social landscape on which it took shape.

When Mary McKeen remarried, she perhaps thought the only reminder of her ex-husband would be the regular alimony payments he was expected to make. But in 1912, Omaha coal magnate Charles Hull sued McKeen and her new husband, William R. McKeen, Jr., in an attempt to get out of paying the $91,000 (over $2 million today) he owed to her. What Hull apparently failed to predict was the counter strategy that the McKeens would employ in attempts to expose Hull’s infidelity and promiscuous behavior. The McKeens’ lawyers began interviewing a who’s who of Omaha movers and shakers, including powerful businessmen, country club employees, and the gamblers and prostitutes of Omaha’s notorious Third Ward. Daniel Wallace’s project analyzes this high-drama story and its implications regarding divorce, prostitution, race, and class in 1912 Omaha.

This event is open to any who wish to attend so please feel free to bring your own lunch and join us. Presented by the Huntington-USC Institute on California and the West (ICW) and USC Libraries Collections Convergence Initiative (CCI).