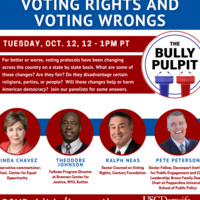 Claims of widespread voter fraud in the 2020 election have been dismissed and debunked in court case after court case. While Democrats cry foul over the "big lie" of a stolen election, most Republicans still believe in the "big steal" that cost Donald Trump the presidency.

CLICK HERE to watch the video for "Voting Rights and Voting Wrongs."

For better or worse, voting protocols have been changing across the country on a state by state basis. What are some of those changes? Are they fair? Do they disadvantage certain religions, parties, or people? Who is pushing for the changes and who is fighting against them? Will these changes help or harm American democracy?

This conversation is part of our Bully Pulpit podcast series. When President Theodore Roosevelt coined the phrase bully pulpit, bully meant "wonderful;" and Roosevelt, according to the Oxford Dictionary, was envisioning "an outstanding opportunity to speak out on any issue." Every exchange is guided by standards central to the Center's mission: Respect each other and respect the truth. Opponents are adversaries, not enemies. And if you lose, don't burn down the stadium.

This event is in partnership with the USC Political Student Assembly and the USC Annenberg Center for Communication Leadership and Policy.

CLICK HERE to watch the video for "Voting Rights and Voting Wrongs."