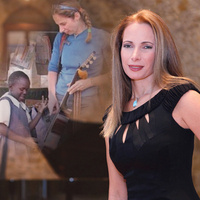 DESCRIPTION:
Composer and pianist Sophia Serghi presents Voice Out of Silence!, her recent documentary about refugee musicians finding their voices amidst the silence of relocation and hardship. Filmed in Cyprus in collaboration with filmmaker Lawrence Cumbo, Voice Out of Silence! explores the social and cultural impact of transient, refugee, and relocated musician communities around the globe. Their encounters provide a stage for unknown musicians, previously silenced by relocation and hardship, to share their voice and experience a renewed sense of identity and community belonging. Join us for an inspiring evening with Serghi as she presents excerpts from the film followed by a panel discussion on the impact of music in difficult times.

Sophia Serghi is a composer and pianist from Cyprus and a professor of music at the College of William and Mary. Her stage, orchestral, chamber, vocal, and multimedia works have been performed across Europe and the United States, including Carnegie Hall in New York, the Kennedy Center in Washington, D.C., the Hellenic Center and Cadogan Hall in London, Athens Concert Hall in Greece, and Concertgebow in Amsterdam. Serghi is the founder of various projects and organizations, including MAX: Multi-Arts Crossings in Cyprus where she is also a director, music tech startup Aplaud Music Group, and music management company Sophia Creative.

Presented by USC Visions and Voices: The Arts and Humanities Initiative. Organized by the USC Thornton School of Music.