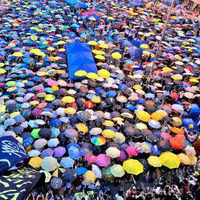 Vigil: Hong Kong On The Brink

Jeff Wasserstrom's presentation will include a short reading from and discussion of his new Columbia Global Reports book -- Vigil: Hong Kong on the Brink. It will be available on Feb. 11. In this illustrated presentation, Prof. Wasserstrom puts events since the 1997 Handover and particularly since the 2014 Umbrella Movement into comparative and historical perspective, drawing on his long term interest in anti-authoritarian protests and the global cities in Asia and his many recent visits to Hong Kong. In addition to introducing material from Vigil, the speaker will bring in things that have happened since he completed work on the book in October, including the massive December 8 march that he observed first hand.

Jeffrey Wasserstrom is Chancellor's Professor of History at UC Irvine. He edited the Journal of Asian Studies for a decade. His previous books include Student Protests in Twentieth-Century China (Stanford, 1991) and, as co-author, the third edition of China in the 21st Century: What Everyone Needs to Know ( Oxford 2018). In addition to his academic writing, he regularly contributes to the popular discussion with articles and op-eds in publications such as the New York Times, the Los Angeles Times, the Wall Street Journal, and the Financial Times.