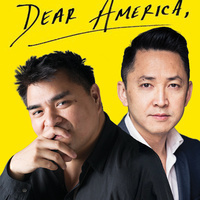 ADMISSION:
This is a ticketed event. A limited number of free tickets will be available for USC students only. Reservations required. RSVP beginning Tuesday, August 28, at 9 a.m.

USC Student Free Tickets: RSVP
For all others, tickets are available for purchase on Brown Paper Tickets:
General Admission: $8
General Admission plus a copy of Dear America: $27
For more info, click here.

In 2011, Jose Antonio Vargas became America’s best-known undocumented immigrant when The New York Times Magazine published his story about his life in the United States after arriving from the Philippines in 1993 at the age of twelve. By coming out publicly as undocumented, he was risking everything he had built in the United States. Now, in Dear America: Notes of an Undocumented Citizen, Vargas examines not only the facts of immigration but also the searing emotional reality of living for 25 years as a contributing member of a country that does not consider him one of its own. The memoir is as much about the excruciating state of existence of undocumented immigrants as it is about the politics of immigration. Vargas will be joined by USC professor Viet Thanh Nguyen for a captivating and timely conversation on Dear America and the facts, myths, and human stories of immigration that the media has not covered.

Bios:
Jose Antonio Vargas is a Pulitzer Prize–winning journalist, an Emmy-nominated filmmaker, and a leading voice for the human rights of immigrants. He is the founder and CEO of Define American, the nation’s leading non-profit media and culture organization that fights injustice and anti-immigrant hate through the power of storytelling. He has worked as a reporter at The Washington Post, The Huffington Post, and the San Francisco Chronicle, among others. In addition, he has produced and directed Documented, an autobiographical feature documentary that aired on CNN, and White People, an hourlong MTV special on what it means to be young and white in a changing America. Currently subject to deportation at any time, he has no permanent residence.

Viet Thanh Nguyen is the author of the Pulitzer Prize–winning novel The Sympathizer and the Aerol Arnold Chair of English at USC. He is also the author of Race and Resistance: Literature and Politics in Asian America, Nothing Ever Dies: Vietnam and the Memory of War, and the short-story collection The Refugees.

Presented by Skylight Books. Co-sponsored by the USC Center for the Study of Immigrant Integration (CSII) and USC Visions and Voices: The Arts and Humanities Initiative.