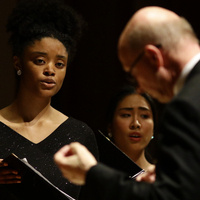 USC Thornton Chamber Singers and Concert Choir: From the Heart

The USC Thornton Chamber Singers and Concert Choir explore repertoire that describes human emotions–from despair and fear to ecstasy and love–featuring the world premiere of two commissioned movements by Connor Koppin on the texts of Brian Newhouse, I Call Your Name, in memory of Dominic Gregorio.