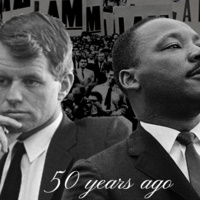 Thank you for joining the Unruh Institute for a conversation commemorating the 50th anniversary of the assassinations of Dr. Martin Luther King Jr. and Robert F. Kennedy. What was lost and how might have the United States be different if they lived longer?

See all photos at our Facebook album here.
Watch the Facebook live stream video of the event here.