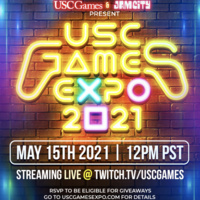 The USC Games Expo will debut more than 70 student-made games at noon Pacific on May 15 in a live-streamed online-only event.

The event for the University of Southern California’s video game program will feature returning host Geoff Keighley, creator of The Game Awards. Long-term partner Jam City returns as well. The USC Games program is rated as the top undergraduate game school in the country by The Princeton Review.

This is the fifth year USC Games has held an expo, which covers the video game development programs offered by USC’s Viterbi School of Engineering and the USC School of Cinematic Arts. The Expo will also feature the first hands-on for the 10 projects being developed in its capstone course, the Advanced Games Program (AGP).

The 10 games from the AGP class are: