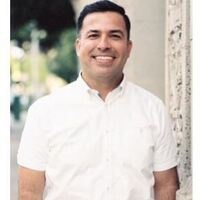 Join us for the first Urban Growth Seminar Series of the semester,  hosted by the Price School Department of Urban Planning and Spatial Analysis. The seminar will feature Erualdo Gonzalez, Professor in the Department of Chicana and Chicano Studies at CSU, Fullerton, speaking on "Latino City: Urban Planning, Politics and the Grassroots".

His research focuses on community development and participation, gentrification, built and food environments and health, and public policy. Erualdo is intrigued with understanding how and reasons local community development practices and policies are made, implemented, questioned, and associated equity and social justice outcomes. His applied specializations include program evaluation, participatory action research, and strategic planning, particularly with Chicana/o, Latina/o, and Mexican immigrant neighborhoods and communities of color.

Dr. González’s book Latino City: Urban Planning, Politics, and the Grassroots (2017, Routledge) traces redevelopment from 1970s urban renewal to present day new urbanism, creative class, and transit-oriented models of planning and their implementation through a case study of Santa Ana, California, one of the most Latina/o-Mexican and immigrant large cities in the U.S. and a place where an allLatina/o city council has been at the helm of a gentrifying downtown, a vision that began in the 1970s when city officials were virtually all white and the downtown was browning. Latino City scrutinizes the evolving ways city redevelopment plans and the media socially construct problems and imagined communities, erase majority populations from redevelopment consideration, and create a set of practices prioritizing future communities. The book also examines generations of resistance to gentrification, such as the ways the community, mainly Mexican immigrant and Mexican-American residents and merchants, resisted, organized, and planned for cultural, social, and economic futures that aligned to the downtown commercial and housing interests of the working-class and immigrant residents and consumers.

González argues that while the discourse, practice, and politics of redevelopment have changed over time, disenfranchisement of local community remained and development continued to favor the privileged middle-classes, creatives, and native born Whites. Latino City is the first book to examine contemporary models of choice for revitalization of US cities from the point of view of a large Latina/o-majority central city and adds to our understanding of the different ways gentrification advances.

Lunch will be provided – Seats are limited, so please RSVP here by Thursday, January 10th to secure your spot.

We hope that many of you, in the USC and Price community will join us for this event!
For any questions, feel free to contact me at relich@price.usc.edu.