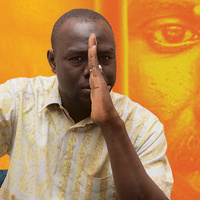 DESCRIPTION:
Shot and produced in the outskirts of Dakar, Senegal, the short films of Moly Kane are part of a new generation of work coming out of the country known as the birthplace of African cinema. Trained at Ciné-Banlieue in Pikine, Dakar, and now a teacher himself, Kane is deeply committed to ethical storytelling through film. His Africa is not one of tragedy or of triumph. Instead, his films tease out the complex experiences of disability, gender, health, migration, globalization, and body politics of those living in the Global South today.

Don’t miss this rare chance to hear from Moly Kane in person and see his three narrative shorts, Moly, Muruna, and Goòm Bi, subtitled in English. Winners of multiple awards, including the Grand Prize at Amnesty International’s Human Rights Film Festival and Best Short Film at FESPACO (Festival panafricain du cinéma et de la télévision de Ouagadougou/Panafrican Film and Television Festival of Ouagadougou), the shorts will be followed by a Q&A with the director.


Presented by USC Visions and Voices: The Arts and Humanities Initiative. Organized by Julie Van Dam and Lydie Moudileno (French and Italian). Co-sponsored by the Center for Black Cultural and Student Affairs, the Levan Institute for the Humanities, and the Black Alumni Association.