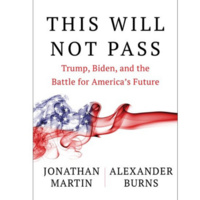 "Trump, Biden, and the Battle for America's Future" with Jonathan Martin and Alexander Burns

Journalists Jonathan Martin and Alexander Burns join CPF Co-Directors Bob Shrum and Mike Murphy to discuss their book, "This Will Not Pass: Trump, Biden, and the Battle for America's Future." Listen to the discussion on The Bully Pulpit podcast June 3.

Book description from the publisher's website:
"More than at any time in recent history, the long-established traditions and institutions of American politics are under siege as a set of aging political leaders struggle to hold together a changing country.

Martin and Burns break news on almost every page, drawing on hundreds of interviews and never-before-seen documents and recordings from the highest levels of government. From Donald Trump's assault on the 2020 election and his ongoing campaign vengeance against his fellow Republicans, to the behind-the-scenes story of Biden's selection of Kamala Harris as his running mate and his bitter struggles to unite the Democratic Party, this book exposes the degress to which the two-party system has been strained to the point of disintegration."