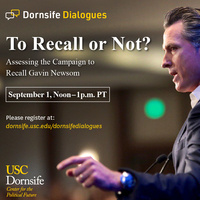 To Recall or Not? Assessing the Campaign to Recall Gavin Newsom

Gavin Newsom was elected California's 40th governor in 2019 with a chance to run for a second term in 2022 election. Hoping to stop Newsom's first term in its tracks, a statewide effort collected enough signatures to force a special election to recall the sitting governor.

The campaign began before the pandemic among critics of Newsom's policies on gun control, immigration, the death penalty, homelessness, and tax rates. As the pandemic hit California, the pandemic was fueled by the governor's stay-at-home orders and his now infamous French Laundry dinner scandal. Even so, Newsom's approval ratings remain higher than former Gov. Gray Davis, the only California governor ever to be recalled.

Get the answers to these and related questions from our panel of experts including Jennifer Cryer, assistant professor of political science and international relations at USC Dornsife; Carla Marinucci, senior writer for POLITICO California Playbook; Seema Mehta, political writer with the Los Angeles Times; and Roger Salazar, political strategist, former campaign press secretary for CA Gov. Gray Davis, and president of Alza Strategies. Robert Shrum, director of the USC Dornsife Center for the Political Future, Warschaw Chair in Practical Politics, USC Dornsife, and Mike Murphy, co-director of the Center for the Political Future and NBC political analyst, moderate the discussion.

CLICK HERE to watch the video for "To Recall or Not? Assessing the Campaign to Recall Gavin Newsom."

Department
Campus Humanities, Center for the Political Future , Dornsife College of Letters, Arts & Sciences
Add this to your calendar