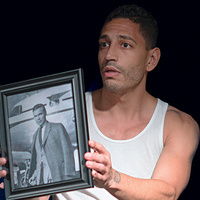 To enter the USC campus, all guests age 12 and older must show proof of full vaccination (either a physical CDC-issued vaccine card or a digital copy available from the State of California here). As an alternative, guests may show a negative COVID-19 PCR test taken in the past 72 hours. Photo ID required. All persons accessing campus must also complete Trojan Check, USC’s daily wellness assessment, on the day of their visit. Although masks are not required, per the LA County Department of Public Health, it is strongly recommended that attendees wear masks for their own protection and the protection of others.

DESCRIPTION:
What happens when a James Bond–obsessed Dominican boy in Queens finds out that the real James Bond was Dominican? In an engaging performance integrating live music and video, writer-actor Christopher Rivas tells the true story of Porfirio Rubirosa, author Ian Fleming’s inspiration for Agent 007. Set to a live percussion score and projections, The Real James Bond…Was Dominican is a young man’s guide to love, sex, color, code-switching, white-washing, success, fake-it-till-you-make-it, and the roller coaster of finding one’s true self.


Bios:
Christopher Rivas (Writer/Performer/Creator) is an award-winning storyteller, actor, author, and podcaster. He currently co-stars in the second season of the Fox series, Call Me Kat, opposite Mayim Bialik. Rivas is simultaneously authoring a book, Brown Enough, that Row House Publishing is slated to release in September 2022, as well as two podcasts with SiriusXM's Stitcher: a limited series on the life of Porfirio Rubirosa and a 40-episode talk-back by the same title of his book. Additional on-screen credits include roles in New Amsterdam, 2 Broke Girls, Grey's Anatomy, and Rosewood.

Daniel Banks (Director) has worked in the U.S. and abroad, having directed such productions as the African premiere of August Wilson’s Jitney at the National Theatre of Uganda; the Eastern European premiere of Anna in the Tropics by Nilo Cruz at the Belarussian National Drama Theatre; a workshop production of Zakiyyah Alexander’s hip hop play Blurring Shine at The Market Theatre in South Africa; and “Tap Into Peace,” a tap and spoken word show set to the music of Stevie Wonder, at Playhouse Square in Cleveland and the New York City and Washington, DC’s Hip Hop Theatre Festivals.

Wilson R. Torres (Percussionist) is a New York native born and raised in Washington Heights. He is very active in educational outreach and has worked with The New York Philharmonic, Jazz at Lincoln Center, and Carnegie Hall outreach programs in a variety of programs ranging from The Life of Mozart to Music of America to Mambo Madness. Being versatile in a variety of styles has led him to perform in many musical settings. In the Latin and jazz scenes, he has collaborated with many greats, such as Cándido Camero, Bobby Sanabria, Hilton Ruiz, Dave Liebman, Dave Taylor, and Bob Mintzer.

Presented by USC Visions and Voices: The Arts and Humanities Initiative. Co-sponsored by La CASA with support from our media partner, KCRW.