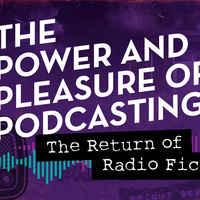 The Power and Pleasure of Podcasting 2: The Return of Radio Fiction

SCHEDULE:
Thursday, March 18
5 to 6 p.m.: Live performances featuring the casts of Video Palace and The Bright Sessions
6:15 to 7 p.m.: Conversations with the cast and producers, including audience Q&A

DESCRIPTION:
For decades, the lifeblood of American radio—fictional programming—was rendered archaic by the emergence of television. Now podcasting has injected new vitality into the genre with powerful writing and performances, creating a testing ground for new programming concepts, as demonstrated by the small screen success of Homecoming, Lore, and Limetown. The Unexpected Disappearance of Mars Patel won a Peabody Award; award-winning actors such as Lawrence Fishburne (Bronzeville) and Rami Malek (Blackout) have produced podcasts as passion projects; and Radio Drama Revival provides a regular showcase for innovative storytellers who are experimenting with audio fiction.

Building on our 2019 program that explored the rising interest in both listening to and producing podcasts, this two-day event will showcase the rapid revival of the radio drama as a site for original programming and as a new pipeline into the entertainment industry.

On Thursday, we will present live performances from the casts and producers of two popular podcasts: the horror series Video Palace and the superhero/psychology program The Bright Sessions. On Friday, two panel discussions will consider the renewed appeal of the medium: the first providing a historical context for thinking about audio fiction in classical radio and podcasting; the second discussing transmedia world-building and genre fiction’s place within today’s podcast industry.

Presented by USC Visions and Voices: The Arts and Humanities Initiative. Organized by the USC Annenberg School for Communication and Journalism.