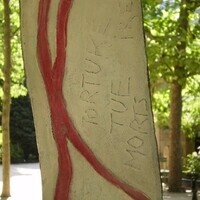 "The Pantheon’s empty plinth: remembering transatlantic slavery in the memoryscapes of Paris" with Charles Forsdick

Inspired by debates about the pantheonisation of Toussaint Louverture, the presentation explores the tensions between remembering and forgetting the transatlantic traffic in enslaved Africans in the context of Parisian lieux de mémoire. While Louverture and the Haitian Revolution have largely been marginalized in the city’s memoryscape, a number of memorials to Atlantic slavery – in the jardin de Luxembourg as well as Drancy, Sarcelles and Saint Denis – have been inaugurated over the past two decades. These are complemented by memories of events such as the silent march in May 1998 in which around 40,000 people (mainly originating from France's overseas departments) participated to mark the sesquicentenary of the abolition of slavery in the French colonial empire. These emerging lieux de mémoire are associated with the recent guerrilla memorialization associated with BLM protests, targeting notably the statue of Colbert outside the Assemblée Nationale, that suggest the dynamic, unfinished nature of this memory work.

Charles Forsdick is James Barrow Professor of French at the University of Liverpool. He has published on a range of subjects, including travel writing, colonial history, postcolonial and world literature, and the memorialization of slavery. Recent books include The Black Jacobins Reader (Duke University Press, 2016), Toussaint Louverture: Black Jacobin in an Age of Revolution (Pluto, 2017), Keywords for Travel Writing Studies (Anthem Press, 2019) and Postcolonial Realms of Memory: Sites and Symbols in Modern France (Liverpool University Press, 2020). He also co-edited a special collection of Modern Languages Open on ‘The global crisis in memory: populism, decolonisation and how we remember in the twenty-first century’ (2020).

For further information on this lecture, do contact Professor Guilan Siassi (gsiassi@usc.edu).

Click here to RSVP and receive a Zoom invitation.

Click here to RSVP and receive a Zoom invitation.