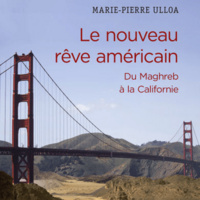 This event has been postponed; please check back for the new date.

The New American Dream: From North Africa to California is the first history of immigrants of North African origin in California, tracing the multiple trajectories of these migrants, many of them French citizens or having dual or triple citizenships and navigating between three cultures (Maghrebi, French, and Californian). Ulloa studied these migrant narratives from a cultural, historical, and sociological perspective. Unlike many other immigrant communities, North African immigration in California is a complex case of a triangulation between the mother country, the host country, and the country of the ex-colonizer. In many instances, immigrants of Muslim or Jewish cultures become the vectors of French cultural influence in California, such as in the food and hospitality business. The cachet of the valued French culture gives them significant symbolic capital - but the France and the Maghreb to which they lay claim are imaginary spaces rife with stereotypes and clichés, and the immigrants’ saga highlights the “bricolage” of their plural identity.