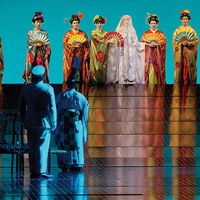 DESCRIPTION:
The USC School of Cinematic Arts will host a series of satellite broadcasts from the Metropolitan Opera presented in spectacular HD digital projection and 5.1 surround sound.

Following a pre-opera discussion hosted by Ken Cazan, chair of vocal arts and opera/resident stage director at the USC Thornton School of Music, we will present a delayed satellite broadcast of Giacomo Puccini’s Madama Butterfly. Leading sopranos Hui He and Ana María Martínez share the heartbreaking title role of the doomed geisha, with tenors Piero Pretti and Andrea Carè as the American naval officer who abandons her. The great Plácido Domingo makes his role debut as Sharpless, alternating with Paulo Szot and Markus Brück. Pier Giorgio Morandi is on the podium for Anthony Minghella’s sweeping production, a perennial audience favorite.

Presented by USC Visions and Voices: The Arts and Humanities Initiative. Organized by the USC School of Cinematic Arts in conjunction with the USC Thornton School of Music and the Metropolitan Opera.