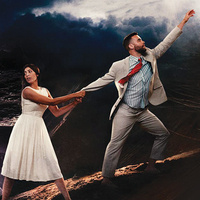 The Life and Afterlife of Eurydice (and Orpheus) in Opera

DESCRIPTION:
In anticipation of the world premiere of Eurydice at LA Opera, composer/conductor Matthew Aucoin and playwright Sarah Ruhl will be joined by UCLA professor Kenneth Reinhard and singers from LA Opera’s Young Artist Program for an evening of musical performance and conversation. The event will explore the original and ongoing role of the myth of Orpheus and Eurydice in the history of Western opera. Both the musical performances and the discussion will range from earlier Orphic music by Monteverdi and Gluck to recent pieces by Harrison Birtwistle and others, including excerpts from Aucoin’s new opera.

Traditionally, Orpheus is the subject of the story, while Eurydice is no more than a lost object. Aucoin, Ruhl, and Reinhard will invite the audience to examine tradition and then break it, posing many questions: Why do composers of opera continue to turn to the myth of Orpheus and Eurydice? What special resources does the story offer to composers and librettists, and how have they understood the way it presents problems of life and death, memory and forgetting? And what does it mean to portray Eurydice as the central consciousness of the story, as Aucoin and Ruhl do in their opera?

Bios:
Matthew Aucoin is an American composer, conductor, writer, and pianist. He is artist in residence at LA Opera, and has worked as a composer and conductor with the Metropolitan Opera, Lyric Opera of Chicago, the American Repertory Theater, the LA Phil, and Music Academy of the West. He is co–artistic director of the American Modern Opera Company.

Sarah Ruhl received her MFA from Brown University, where she studied with Paula Vogel. An alum of 13P and of New Dramatists, she won a MacArthur Fellowship in 2006 and the Steinberg Distinguished Playwright Award in 2016. She has been the recipient of the PEN Center Award for a mid-career playwright, the Whiting Award, the Feminist Press’s Forty under Forty Award, and a Lilly Award. Her works include Stage Kiss; In the Next Room, or The Vibrator Play; The Clean House; Passion Play; Dead Man’s Cell Phone; Melancholy Play; Orlando; Demeter in the City; Late, A Cowboy Song; Three Sisters; Dear Elizabeth; The Oldest Boy: A Play in Three Ceremonies; For Peter Pan on Her 70th Birthday; and How to Transcend a Happy Marriage.

Kenneth Reinhard is a professor of comparative literature and English and director of the graduate certificate program in Experimental Critical Theory at UCLA. With Slavoj Žižek and Eric Santner, he is the author of The Neighbor: Three Inquiries in Political Theology, and, with Julia Reinhard Lupton, of After Oedipus: Shakespeare in Psychoanalysis. He has also written articles on French and German philosophy, psychoanalysis, literature, religion, and opera, and is the general editor and co-translator of The Seminars of Alain Badiou and many other philosophical works by Badiou.

Presented by USC Visions and Voices: The Arts and Humanities Initiative in partnership with LA Opera.