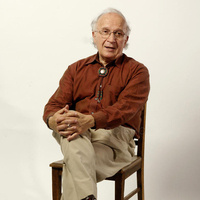 The Lecture Project is a series of public lectures by prominent writers, historians, and philosophers on the connection between art and ethics. Curated and hosted by the studio of Enrique Martínez Celaya in association with the USC Dornsife College of Letters, Arts and Sciences, it reflects a commitment to re-assert the intellectual and ethical responsibilities of art and criticism while exploring their relevance for public life. In its earlier incarnation, The Lecture Project, funded in part by the Knight Foundation, was active at Martínez Celaya's Miami studio from 2010 through 2012 and included eleven lectures.

Chemistry in Art, Art in Chemistry, and the Spiritual Ground They Share

Is there an analogue in science to abstract art? In a richly illustrated lecture that moves from chemistry as a tool for art to the artistic elements in the molecular science, Roald Hoffmann explores the relationship between chemistry, art, and the spiritual ground they share as tools for the discovery of meaning.

Roald Hoffmann, a Nobel laureate, poet, and playwright, is a tireless advocate of the wonders of science and the beauty of chemistry. Born in 1937 in Złoczów, Poland, Hoffmann came to the United States in 1949 and studied chemistry at Columbia University. He earned his doctoral degree from Harvard University in 1962. In 1965 Hoffmann began working at Cornell University, where he is the Frank H. T. Rhodes Professor of Humane Letters, Emeritus. Hoffmann likes to characterize his contribution to chemistry as “applied theoretical chemistry,” his own blend of computations stimulated by experiment and coupled to the construction of generalized models, or frameworks for understanding. In 1965, in collaboration with Nobel laureate R. B. Woodward, he introduced the Woodward-Hoffmann rules, a method for exploring the electronic structure of transition states and intermediates in organic reactions. He received the Nobel Prize in Chemistry in 1981, jointly with Kenichi Fukui, for his theories concerning the course of chemical reactions.

Hoffmann has received the National Medal of Science and several awards from the American Chemical Society, including the Priestley Medal, the Arthur C. Cope Award in Organic Chemistry, and the Award in Inorganic Chemistry. He holds more than 25 honorary degrees and is a member of the National Academy of Sciences, the American Academy of Arts and Sciences, the American Philosophical Society, and several foreign academies. He has published more than 600 scientific articles.

As a writer, Hoffmann has carved out a land between science, poetry, and philosophy, through many essays, five nonfiction books, three plays, and five published collections of poetry, including bilingual Spanish-English and Russian-English editions. Hoffmann was also the presenter of a television series, The World of Chemistry, that aired on PBS and on stations worldwide.

Admission is free, though seating is limited. RSVP required.

The lecture begins at 7:00 PM. Light refreshments will be served.

Department
Dornsife Office of Communication
Add this to your calendar