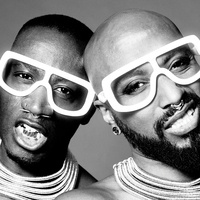 Once upon a time in a galaxy not far away, there lived two kings. The first king, Manchildblack, was well-known throughout the cosmos for his ethereal vocals, celestial sonics, and earthy musical messages. The other king, Monstah Black, was a star in the solar system for his gravity defying performances, gender-bending fashions, and spacey disposition. One magical night, an inexplicable ultramagnetic pull forced the two titans to collide. It was then that the universe was changed forever: Manchildblack and Monstah Black united and became The Illustrious Blacks.

Inspired by Prince, David Bowie, Grace Jones, Boy George, and George Clinton, The Illustrious Blacks are queer performers who fuse futuristic funk, hypnotic house, and cosmic pop into pulsating positivity. Playing epic live shows and DJ sets that mash up music, dance, theatre, and fashion to expand minds and shake booties, the duo of Monstah Black and Manchildblack make music, tour, and serve their outrageous feast of aural and visual delights to save the world one beat at a time.

Bio:
The Illustrious Blacks are not only co-pilots in their artistic voyage but a real-life married couple united in their fantastic voyage through life. Since releasing their debut EP, NeoAfroFuturisticPsychedelicSurrealisticHippy, in 2007, the Afrofuturistic, queer performance duo has played at packed venues around the world and been featured in The New Yorker, Billboard, Paper Magazine, Out.com, and The New York Time. Monstah Black and Manchildblack are currently working on a new full-length show and debut full-length album.

Presented by USC Visions and Voices: The Arts and Humanities Initiative. Co-sponsored by ONE National Gay & Lesbian Archives at the USC Libraries, USC Queer and Ally Student Assembly, and the LGBT Resource Center.