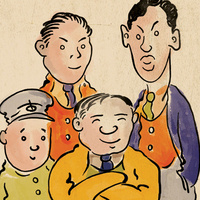 The Four Immigrants: From Manga to Musical

The Four Immigrants: From Manga to Musical

DESCRIPTION:
The Four Immigrants: An American Musical Manga is an award-winning musical about the adventures of young Japanese immigrants in early-twentieth-century San Francisco. Based on Manga Yonin Shosei, a semi-autobiographical series of comic strips written and drawn by Henry Yoshitaka Kiyama from 1924 to 1927, the show follows Charlie, Frank, Fred, and Henry as they pursue the American Dream in the face of numerous obstacles. Both the musical and the original manga it’s based on contrast the gag-driven humor of Western comic strips with the discrimination faced by first-wave immigrants, and explore what it means to find home in a foreign land.

Visions and Voices is proud to present a concert performance of The Four Immigrants preceded by a special discussion about the show and its unique source material. Panelists include the play’s author/composer, Min Kahng, and director, Leslie Martinson, along with translator and manga historian Frederik L. Schodt and moderator Julia Cho, co-founder and co-producing artistic leader of Artists at Play, a Los Angeles–based theatre company that focuses on Asian American narratives.

Bios:
Min Kahng is an award-winning playwright and composer whose world-premiere works include The Four Immigrants: An American Musical Manga (recipient of the Bay Area Theatre Critics Circle Awards for Original Script and Original Music, the Edgerton New Play Award, and a NAMT Production Grant), GOLD: The Midas Musical, Where the Mountain Meets the Moon: A Musical Adaptation, and Tales of Olympus. Kahng is a Jonathan Larson Grant finalist, a Richard Rodgers Award finalist, a resident playwright at Playwrights Foundation, and a proud member of the Dramatists Guild. (Instagram, Twitter)

Leslie Martinson worked for many years with TheatreWorks Silicon Valley, where she was the associate artistic director and the casting director. Her directing credits there include world-premiere musicals and West Coast premieres. A graduate of Occidental College and the University of Sussex, she has been a Watson Fellow and a member of the Lincoln Center Directors Lab. Martinson has also worked with the San Francisco service organization Theatre Bay Area since 2002, and was awarded an Individual Artist Fellowship in Stage Direction by the Arts Council of Silicon Valley for artistic achievement and community impact. She teaches master classes and workshops for many universities and theatre companies. (Facebook)

Frederik L. Schodt is an author and translator who has written extensively on Japanese manga, as well as on pop culture, technology, and history. Schodt received an award at the Manga Oscar Awards in 1983 for his groundbreaking book Manga! Manga! The World of Japanese Comics. The now-classic book includes an introduction by Osamu Tezuka and has been reprinted several times. His other books include Dreamland Japan, America and the Four Japans, Native American in the Land of the Shogun, and The Astro Boy Essays. In 1998, Schodt translated and annotated Japanese immigrant Henry Kiyama’s Manga Yonin Shosei, one of the first American original comic books. (Twitter)

Julia Cho (moderator) is a founding member and producing artistic leader of Artists at Play. With AAP, she has helped develop and produce numerous works created by and featuring Asian American artists. As an actor, Cho’s credits include the Emmy-winning web series The Lizzie Bennet Diaries and many television shows including This Is Us, Goliath, and Scandal. She has performed and toured with Artists at Play, East West Players, Will & Company, hereandnow, and Word for Word (San Francisco), as well as readings for Playwrights’ Arena, Pasadena Playhouse, and Center Theatre Group. (Instagram, Twitter)

Presented by USC Visions and Voices: The Arts and Humanities Initiative. Co-sponsored by Artists at Play, the Department of East Asian Languages and Cultures, and Asian Pacific American Student Services.