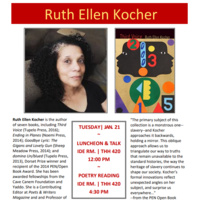 There will be a lucheon and talk at 12pm, followed by a poetry reading of Kocher's Third Voice at 4:30pm.