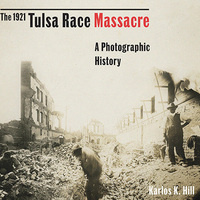 On the evening of May 31, 1921, and in the early morning hours of June 1, several thousand white citizens and authorities violently attacked the African American Greenwood District of Tulsa, Oklahoma. In the course of some twelve hours of mob violence, white Tulsans reduced one of the nation’s most prosperous black communities to rubble and killed an estimated 300 people, mostly African Americans.

Karlos K. Hill, Associate Professor and Chair of the Clara Luper Department of African and African American Studies at the University of Oklahoma, presents a range of photographs taken before, during, and after the massacre, mostly by white photographers. Comparing these photographs to those taken elsewhere in the United States of lynchings, Hill makes a powerful case for terming the 1921 outbreak not a riot but a massacre. White civilians, in many cases assisted or condoned by local and state law enforcement, perpetuated a systematic and coordinated attack on Black Tulsans and their property.