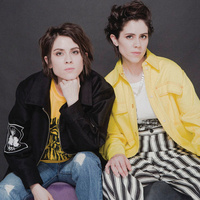 Visions and Voices will provide a limited number of FREE audiobooks of Tegan and Sara’s acclaimed memoir, High School, to USC students! Details provided at the event.

In an intimate and inspiring live conversation, million-selling and Grammy-nominated pop music duo and twin sisters Tegan and Sara will discuss their experiences and growth as artists, authors, and activists with USC professor Karen Tongson, chair of Gender & Sexuality Studies and co-host of the podcast Waiting to X-Hale.

Since 1999, Tegan and Sara Quin have released nine studio albums and played almost every bar, club, theater, arena, and festival stage during their evolution from indie rock sensations to bona fide pop stars on a mission to alter the mainstream. They have played Coachella, appeared on Ellen, toured with Katy Perry, and been covered by the cast of the TV show Glee. Tegan and Sara performed their single from The Lego Movie, “Everything Is Awesome,” at the Oscars.

In 2017, they launched the Tegan and Sara Foundation to help raise funds to improve the lives of LGBTQ women and girls. In 2018, Tegan and Sara were given the Governor General’s Performing Arts Award in Canada, the country’s highest honor for creatives. And in 2019, Tegan and Sara published their memoir, High School, which quickly became a New York Times bestseller. In conjunction with the memoir, they released Hey, I’m Just Like You, reimagining their first songs written back in the ‘90s in their bedrooms.

Presented by USC Visions and Voices: The Arts and Humanities Initiative as part of USC Amplified. Co-sponsored by the Student Assembly for Gender Empowerment.