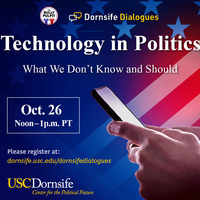 Technology in Politics: What We Don’t Know and Should

The use of technology in politics - from social media to smart phones to targeted internet advertising - has become more sophisticated and widespread. As its prevalence expands, so does the number of questions about its use and value, and its impacts on politics and civil society.

CLICK HERE to watch the video for "Technology in Politics: What We Don't Know and Should."

What about people who use far less technology because of their age or lack of resources? Are they being fairly and accurately represented in politics as the use of technology increases?

Get answers to these and related questions during this energized discussion among a host of noted experts.

This conversation is part of our Bully Pulpit podcast series. When President Theodore Roosevelt coined the phrase bully pulpit, bully meant "wonderful;" and Roosevelt, according to the Oxford Dictionary, was envisioning "an outstanding opportunity to speak out on any issue." Every exchange is guided by standards central to the Center's mission: Respect each other and respect the truth. Opponents are adversaries, not enemies. And if you lose, don't burn down the stadium.

This event is in partnership with the USC Center for Communication Leadership and Policy.

CLICK HERE to watch the video for "Technology in Politics: What We Don't Know and Should."