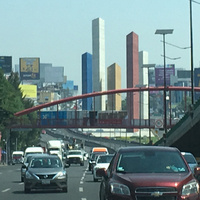 A talk by Tarek Elhaik

In this talk, Elhaik meditates on his recent fieldwork encounters with conceptual artists whose image-work, ethical demands, and aesthetic struggles straddle the wild borders between anthropology, art history, and philosophy. Through the image-work and writings of Adrian Piper, Anna Maria Maiolino, Mathias Goeritz, and Mounir Fatmi, Elhaik locates and problematizes what he calls 'states of cogitation': states of mind, of the soul, meditative moods and thought processes that reconfigure the modernist problem of abstraction. "Cogitation” is a term Elhaik reanimates from the 12th century Andalusian rationalist philosopher Averroes to challenge anthropology's self-designation as the science of the concrete.

Tarek Elhaik is Associate Professor of Anthropology at the University of California, Davis. His research is focused on aesthetic anthropology, philosophies of the image, curatorial practice, and conceptual artists' modes of thinking. He is the author of The Incurable-Image: Curating Post-Mexican Film and Media Arts (Edinburgh University Press, 2016), a book based on participant-observation in Mexico City's contemporary art scene and intellectual life, and is currently finishing a new book titled States of Cogitation. He is also the founder of AIL: the Anthropology of the Image Lab.

This lecture is part of a series on “Media, Form, and Thought,” generously cosponsored by the USC Dornsife Divisional Vice Dean for the Humanities, Undergraduate Dean, and Graduate Dean, the Departments of Comparative Literature, Latin American and Iberian Culture, American Studies and Ethnicity, English, French and Italian, and Slavic Languages and Literatures, the French and Francophone Research and Resource Center, the German Studies program, the Center for Visual Anthropology, the Visual Studies Research Institute, and the School of Cinematic Arts.