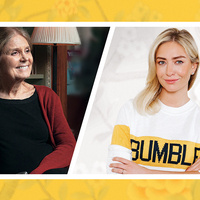 Taking the Leap with Gloria Steinem and Whitney Wolfe Herd

Taking the Leap with Gloria Steinem and Whitney Wolfe Herd
Wednesday, April 29, 2020, from 6 to 7:30 p.m.
Live via Zoom
Open to USC students, faculty, and staff only.

Bios:
Gloria Steinem is a writer, political activist, and feminist organizer. She was a founder of New York and Ms. magazines, and is the author of The Truth Will Set You Free, But First It Will Piss You Off, My Life on the Road, Moving Beyond Words Revolution from Within, and Outrageous Acts and Everyday Rebellions. She co-founded the National Women’s Political Caucus, the Ms. Foundation for Women, the Free to Be Foundation, and the Women’s Media Center in the United States. In 2013, she was awarded the Presidential Medal of Freedom by President Barack Obama. In 2019, she received the Freedom Award from the National Civil Rights Museum. She is the subject of Julie Taymor’s upcoming biopic, The Glorias, set to premiere in Fall 2020.

Whitney Wolfe Herd is the founder and CEO of Bumble, the first social network designed for women. Since founding the app in 2014, Wolfe Herd’s vision has driven Bumble to 150 countries and more than 75 million users. Wolfe Herd has been named to TIME Magazine’s 100 Most Influential People, Forbes “30 Under 30,” the Bloomberg 50, and InStyle’s 50 Women Changing the World. Prior to Bumble, Wolfe Herd was a co-founder of the dating app Tinder.

Presented by the Lloyd Greif Center for Entrepreneurial Studies, USC Visions and Voices: The Arts and Humanities Initiative, and Athena Women’s Entrepreneurship Summit.