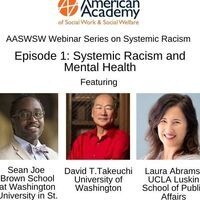 The American Academy of Social Work and Social Welfare (AASWSW), which is proudly housed at the USC Suzanne Dworak-Peck School of Social Work, launches a new webinar series on systemic racism, featuring Fellows of the AASWSW who are subject experts.

The U.S. Surgeon General's Report on mental health problems among underrepresented minorities, published in 2002, suggested a significant contribution from systemic racism. Since that time, scholars have uncovered links between the two phenomena. This webinar uses an interview format to explore recent evidence of the link between systemic racism and mental health.