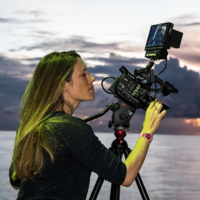 Stephanie Spray is a filmmaker, phonographer and anthropologist whose work explores social aesthetics and art in everyday life. She holds a PhD in Social Anthropology with Media from Harvard University, an MA in Religion from Harvard Divinity School and a BA in Religion from Smith College. Spray is also an affiliate at the Sensory Ethnography Lab at Harvard University, where she was a student and teacher. Her creative work has been exhibited and awarded nationally and internationally. Her film MANAKAMANA (with Pacho Velez) won various awards, including two Leopards at the Locarno International Film Festival and first prize at BAFICI. Manohla Dargis, chief film critic of The New York Times, listed it as a best film of 2014.