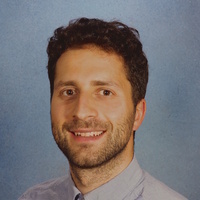 An online lecture by Florian Zabransky (PhD candidate at the Weidenfeld Institute–Centre for German-Jewish Studies at University of Sussex, UK)
2020-2021 Margee and Douglas Greenberg Research Fellow

Intimacy is a recurring theme in the USC Shoah Foundation Visual History Archive's oral history interviews. In the interviews, survivors of the Holocaust touch upon a wide range of topics such as romantic love, sexual relations, sexual barter, marriage, contraception, abortion, and sexualized violence that were pivotal both for women and men. Although often very limited, the intimate agency of the persecuted in times of genocide stresses intimate decisions and choices linked to the private sphere, for example whether to have children in the ghettos or the barter of intimacy for food and survival.

An intimate history of the Holocaust adds a pertinent perspective to the understanding of the Holocaust. It demonstrates how intimacy provided comfort, for instance, in the ghettos but also created dependencies and reproduced inequalities among the sexes. At the same time, among the partisans, intimacy allowed male partisans to demonstrate their masculinity and virility, and to stress their status in an overwhelmingly homosocial environment.

In this lecture, Florian Zabransky focuses on two sites of genocidal violence: namely ghettos created by the Germans in occupied Poland and the Soviet Union, and partisan warfare. In his research, Florian Zabransky seeks to excavate the particular intimate experience of male Jews and addresses the following questions: How is intimacy narrated in the oral history interviews? How were relationships negotiated in the ghettos and among the partisans? Which social dynamics, traditional gender roles, hierarchies and power relations become evident? How are queer relations narrated in the interviews? And finally, in the interview itself, how do the interviewer and interviewee talk about intimacy?

Florian Zabransky is the 2020-2021 Margee and Douglas Greenberg Research Fellow at the USC Shoah Foundation Center for Advanced Genocide Research. He is a doctoral researcher at The Weidenfeld Institute–Centre for German-Jewish Studies at University of Sussex. He was awarded the Clemens N. Nathan Scholarship for his thesis on male Jewish intimacy during the Holocaust. For his research, he has received several awards, such as an EHRI Fellowship, a GHI London Fellowship, and the Joseph Wulf Fellowship at the Institute for Contemporary History in Munich. His research interests focus on the history of sexuality and emotions, gender and the Holocaust, and critical men’s studies. He studied Sociology at Goethe-University Frankfurt, Sapienza – Università di Roma and Hamburg University. He also worked at institutions commemorating the Holocaust, such as the Neuengamme Concentration Camp Memorial Site near Hamburg and the Fritz Bauer Institute in Frankfurt am Main.