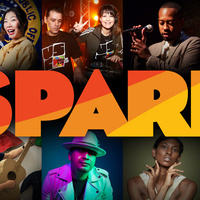 DESCRIPTION:
As the world shelters in place and struggles for justice, the arts are more important than ever. Join us as we kick off the 2020–21 academic year and 15th season of Visions and Voices with a dynamic and inspirational evening of music, dance, spoken word, comedy, and more. Following a welcome by USC President Carol L. Folt, this special event will amplify the role of the arts as a means of connection, resilience, healing, and social change. Attendees will also be invited to join the artists “backstage” for an epic virtual dance party starring you.

Usually limited to USC students only, we are excited to announce that because this year’s kickoff will be presented online, we can open it up to everyone. Let’s get together and celebrate the 15th season of Visions and Voices!

Bios:
Jessa Calderon is a Tongva and Chumash songwriter, poet, hip hop artist, performer, and energy worker. She encourages community and youth to find their healing mentally, physically, and spiritually through her words, music, and practices. Calderon has worked with community and youth from many Nations, helping them find and feel good about themselves.

Rudy Francisco is one of the most recognizable names in spoken word poetry. An amalgamation of social critique, introspection, honesty, and humor, the San Diego–based artist uses personal narratives to explore race, class, gender, and religion and promote healthy dialogue, discourse, and social change. Francisco is the 2009 National Underground Poetry Slam Champion, 2010 Individual World Poetry Slam Champion, and has appeared on TV One’s Verses and Flow.

Phranc, the  All-American Jewish Lesbian Folksinger, is an internationally acclaimed performer and visual artist whose work uses both humor and anger to interrogate traditional gender perspectives. She writes, records, performs, and creates paper sculptures that tell stories, document history, honor Amazons, and protest injustice. She has forged her butch identity in cardboard, on stage, and on album covers. Phranc is currently working on a multi-media memoir Phranc Talk.

Yosimar Reyes is a nationally acclaimed poet and public speaker. Born in Guerrero, Mexico, and raised in Eastside San Jose, Reyes explores the themes of migration and sexuality in his work. The Advocate named Reyes one of “13 LGBT Latinos Changing the World” and Remezcla included Reyes on their list of “10 Up And Coming Latinx Poets You Need To Know.”

Micaela Taylor is a professional dancer, choreographer, and artistic director of The TL Collective. A recipient of the Inaugural Springboard EMERGE Choreographic Award, she was named one of Dance Magazine’s “25 to Watch” in 2018 and received the Dance Magazine cover story in May 2020. Taylor has been commissioned to choreograph and teach by BODYTRAFFIC, Springboard Danse Montreal, Cleo Parker Robinson Dance, B12 Festival Berlin, and more.

Dancer and choreographer Jakevis Thomason graduated from the USC Kaufman School of Dance in 2020, where he trained across a spectrum of forms, from concert to commercial, shaping him into a prolific hybrid artist with a passion for teaching. Despite his youth, he is quickly gaining recognition and acclaim as both a choreographer and creative director for screen and stage. Since 2018, Thomason has worked closely with choreographer Frank Gatson, creative director for recording artists such as Jennifer Lopez, Rihanna, and Beyoncé, and he eventually hopes to have his own company to showcase his works.

Urban Assault (a.k.a. DJ Faust and DJ Shortee) specializes in dubstep, drum and bass, drumstep, electro house, and much more. Faust was ranked as one of the top five turntablists in the world by SPIN, and Shortee has been described as “the world’s premiere female DJ” by the GRAMMY Foundation.

Kristina Wong is an award-winning performance artist, actor, comedian, and elected representative of Koreatown in Los Angeles who has been presented across North America, the UK, Hong Kong, and Africa. When her national tour of Kristina Wong for Public Office was sidelined by the pandemic, she pivoted to touring Kristina Wong, Sweatshop Empire on Zoom about how she went from out-of-work artist to the organizer of the Auntie Sewing Squad, a national, volunteer network of people of all genders who are sewing masks to for essential workers and vulnerable communities.

Department
Student Affairs, Visions and Voices: The Arts and Humanities Initiative
Add this to your calendar