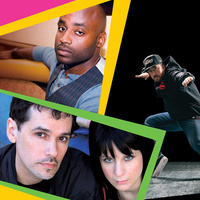 ADMISSION:
Admission is free and open to USC students only. Line up and get a wristband at the event check-in on Trousdale Parkway in front of Bovard Auditorium. Wristbands, shirts, and bags will be distributed on a first-come, first-served basis. Doors open at 7:15 p.m. Arrive early!

The evening will open with an electrifying spoken word performance by three-time National Poetry Slam champion Javon Johnson. Then, Versa-Style Dance Company will mash up the vintage sounds of R&B and Motown with exuberant hip hop dance to explore the roots of inequalities and hardships in today’s volatile social climate in their powerful show, Box of Hope. The award-winning dance company will push the boundaries of traditional hip hop dance, explore the complex realities and personal landscapes of Los Angeles, and, above all, bring a sense of understanding and hope for all people.

After the show, stick around for a dance party and reception featuring DJs Urban Assault (aka Faust and Shortee).


Bios:
Javon Johnson is an award-winning spoken word/slam poet and author of Killing Poetry: Blackness and the Making of Slam and Spoken Word Communities. Formerly a postdoctoral fellow in American studies and ethnicity at USC, Johnson is currently a professor at the University of Nevada, Las Vegas. (Facebook, Twitter, YouTube)

Urban Assault (aka Faust and Shortee) specializes in dubstep, drum and bass, drumstep, electro house, and much more. Faust was ranked as one of the top five turntablists in the world by SPIN, and Shortee has been described as “the world’s premiere female DJ” by the Grammy Foundation. (Facebook, Soundcloud, Twitter, YouTube)

Presented by USC Visions and Voices: The Arts and Humanities Initiative. Co-sponsored by USC Residential Education.

Admission is free and open to USC students only.