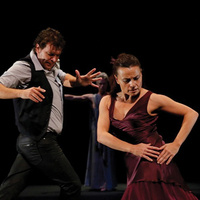 DESCRIPTION:
“Never, until I saw Santangelo’s ensemble, their heels stamping, their arms cutting through the air, had I seen a chorus whose physical force could support the fate-heavy songs that Sophocles wrote for his plays. As for Barrio, though she spoke rarely, dancing seemed better than words: no rhetoric, no explanations, but just passion, majesty, absorption.”
—The New Yorker

Don’t miss Antigona, Martín Santangelo’s stunning flamenco interpretation of Sophocles’ Antigone, performed by Noche Flamenca and starring flamenco superstar Soledad Barrio as a disenfranchised woman struggling against patriarchal authority. At its heart, the story of Antigone resonates with the roots of flamenco, which is based not in any one culture or religion, but on the strength of family. Antigone’s story is her humanity and her quest to bury her brother regardless of the circumstances.

Noche Flamenca is the most authentic flamenco company touring today. Formed in 1993 by Martín Santangelo and his Bessie Award–winning wife, Soledad Barrio, the company is celebrated around the world for its spellbinding, deeply emotional performances. (Twitter)

Presented by USC Visions and Voices: The Arts and Humanities Initiative. Co-sponsored by the USC Kaufman School of Dance, the USC School of Dramatic Arts, the Classics Department, and the Spanish and Portugese Department.