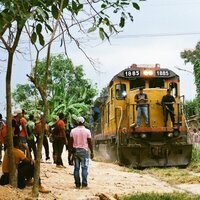 Soldiers and Kings: Violence, Representation, and Photoethnographic Practice in the Context of Human Smuggling Across Mexico (USC VSRI)

BACK TO SCHOOL: Soldiers and Kings: Violence, Representation, and Photoethnographic Practice in the Context of Human Smuggling Across Mexico

Since 2015 archaeologist and recent MacArthur Award recipient (2017), Jason De León, has been involved in an analog photoethnographic project focused on documenting the daily lives of Honduran smugglers who profit from transporting undocumented migrants across Mexico. De León discusses the relationship between transnational gangs and the human smuggling industry, outlining the complicated role that photography plays as a field method and data source in this violent and ethically challenging ethnographic context.