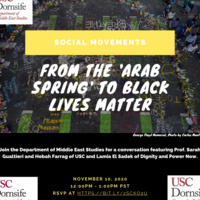 Social Movements: From the 'Arab Spring' to Black Lives Matter

In 2010, movements agitating against state sponsored violence and calling for democratic reform began growing across the Middle East and North Africa in what became known as the ‘Arab Spring’. Authoritarian regimes fell in Egypt, Tunisia, and Libya. The Black Lives Matter movement, founded in 2013, has mobilized around similar issues, while leading the call for racial justice and an end to mass incarceration in the United States. While often viewed as distinct, separated by geography and ideology, there is a long-standing interconnection between these movements for progressive social change.

Join the Department of Middle East Studies for a noon time conversation and Q&A focused on exploring the history, linkages and similarities between current social movement organizing in the Middle East and United States.

The conversation features Sarah Gualtieri and Hebah Farrag of USC, and Lamia El Sadek of Dignity and Power Now, a Los Angeles based grassroots organization that fights for the dignity and power of all incarcerated people, their families, and communities. Lamia El Sadek will share her practical experience as an organizer involved in both the Tahrir Revolution in Egypt and Black Lives Matter organizing in Los Angeles. Hebah Farrag will draw from her extensive research and writing on new spiritualities in the Movement for Black Lives, and on her activism within Muslim progressive circles. Sarah Gualtieri will offer a historical framework for discussing Afro-Arab solidarities, spaces and tensions. Together they of will explore connections between racial and gender justice advocacy for Black Americans and Middle Easterners, including lessons learned and shared across social movement organizing models, language and slogans.