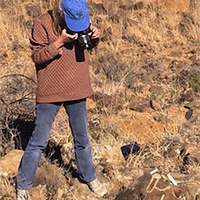 From the speaker: "I was trained as an anthropological archaeologist.  I received my PhD at UC Berkeley in Anthropology in 1995 with a dissertation on the two most famous Paleolithic Central European sites Dolni Vestonice and Willendorf, their histories and roles in formal classifications of prehistoric life.   My professional interests combine an inquiry into the materials of the prehistoric past with a concern for present social contexts in which archaeology and other sciences operate.  I specialize in early prehistory of Europe and the Old World in general, with gender archaeology as the central focus of my research.  My work moves between anthropology, archaeology, history, social studies of science, and gender studies. In 2013 I completed an almost decade long book project that traced the emergence of the “shaman” as a standard figure in anthropological archaeology.  Beginning with 17th and 18th century travel reports from Siberia as a part of a colonizing effort by the Russian Empire.  The book Wayward Shamans: The Prehistory of an Idea addresses the portrayal of shamans as a universal, masculine category in anthropology and prehistoric archaeology.  In 2011  I started a new research in South Africa, studying rock art and its production. The fieldwork takes place in the Northern Cape where I have most generous collaborators at the McGregor Museum in Kimberley.  I have a joint appointment in the Anthropology Department and in Women’s and Gender Studies, and I teach courses in both units."