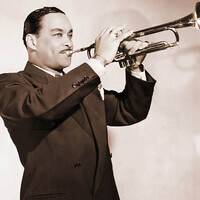 In 1935, Los Angeles–based musician Buck Clayton formed a jazz band called Harlem Gentlemen to perform in Shanghai. Li Jinhui, who is considered the father of Chinese popular music, had been performing in the “Paris of the East” for years when Clayton and his colleagues arrived. Clayton and Li eventually worked together to form a new and unique blend of American jazz and Chinese traditional music.

Presented by USC Visions and Voices: The Arts & Humanities Initiative.