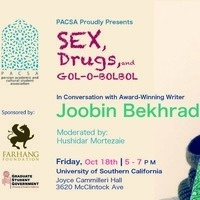 PACSA Presents: Sex, Drugs, and Gol-o-bolbol. Join Hushidar Mortezaie as he talks to Bekhrad about cultural hybridity and his experiences growing up in the Iranian diaspora, and the ways in which they’ve informed his acclaimed writing.

Joobin Bekhrad is the founder and former editor of Reorient and the Canadian Desk Editor of ArtAsiaPacific. He has also contributed to a host of other notable publications, such as Columbia University’s Columbia Journal (where he served as Online Guest Editor in late 2016), The New York Times, The Washington Post, The Economist, The Financial Times, The Guardian, The Independent, Forbes, GQ, Paper, CNN, and the BBC, been interviewed by ones like Newsweek, Monocle, PRI, and the CBC, and seen his award-winning writing translated into a wide variety of languages.

In addition to his many articles, he is the author of a translation of Omar Khayyam’s Robaiyat from Persian into English, a Tehran-set novella (Coming Down Again), a novel about Toronto’s Iranian community (Guguli), a book of essays and stories about Iranian culture (With My Head in the Clouds and Stars in My Eyes), and four volumes of Iran-inspired poetry (Turncoats of Paradise, Down the Twilit Hill, Elsewhere, and Lovers of Light).

Hushidar Mortezaie was born in Tehran and immigrated to the Bay Area in 1975. He moved to NYC in 1994 for 10 years, after which, he returned to California, living between the Bay Area and Los Angeles. Mortezaie's work spans the mediums of textile, packaging, graphic design, painting, and fashion. Conceptually his work dives into the junctions of gender, politics, and archive. He holds a mirror to the intersection of mass consumption and stereotype through branding, propaganda, and the cult of celebrity. Mortezaie is a fashion designer and visual artist who combines these varied mediums into installation-like tableaus that create a political pop-art world of satire and artifice, reflecting the dystopia and information overload of the 21st century through detail and layering of concepts, ages, and mediums. He draws upon his Iranian and Muslim roots, using fashion as an artist’s medium to convey that what one wears is a political act that can signify defiance, faith, and strength—yet simultaneously stereotype and control.

Through the pioneer celebration of his heritage, Mortezaie’s work prompted the rise of Middle Eastern style and Islamic motifs in fashion and Iranian New Wave conceptual art in the late 1990s forward. His work has been featured in publications including Italian Vogue, Huffington Post, W magazine, worn by Brad Pitt in the motion picture Fight Club as well as by Sarah Jessica Parker in the TV Show Sex and the City. Singers such as Madonna, Britney Spears, and Beyonce, along with other celebrities, transferred his visual messages with all of the beauty of the Middle East to a Western audience. He created a new visual language through graphic design, fashion, and fine art to inspire a new generation of Iranian American immigrants to take pride in their culture with the hopes for the children of the new Iranian Renaissance and throughout the region to flourish.