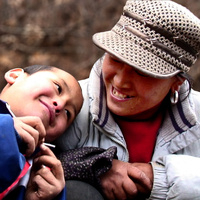 Nowhere to Call Home provides a rare glimpse into the world of a Tibetan farmer, torn between her traditional way of life and her desire for her son to have a better future in the city.

Shot in the slums of Beijing and a remote village, this gripping story of a woman determined to beat the odds puts a human face on the political strife that fractures China and Tibet. Along the way it challenges common western stereotypes about Tibetans, and reveals a dark side of village life, where, as the saying goes, ‘women aren’t worth a penny.’

Widowed at 28, Tibetan farmer Zanta defies her tyrannical father-in-law and refuses to marry his only surviving son, who is in prison for armed robbery. When Zanta’s in-laws won’t let her seven-year-old go to school, she flees to Beijing to become a street vendor. Destitute, and embattled by ethnic discrimination she inveigles a foreign customer into helping pay her boy’s school fees.

When the three travel back to Zanta’s village for the New Year holiday, Zanta’s father-in-law takes her son hostage.  The unwitting American journalist faces a tough decision: does she intervene in the violent family dispute, or watch in silence as Zanta and Yang Qing face abuses typically borne by Tibetan widows and their children.

Jocelyn Ford is a Beijing-based award-winning public radio  journalist and filmmaker who has reported from Asia for three decades. Her audio work can be heard on Marketplace (Tokyo and Beijing bureau chief 1994-2006), Radio Lab, The World and other public radio programs. Her award-winning 2014 documentary Nowhere To Call Home: A Tibetan in Beijing has been translated into 11 languages.

For more information and to register, please visit https://china.usc.edu/calendar/screening-nowhere-call-home.