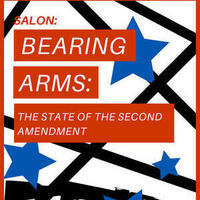 Salon--Bearing Arms: The State of the Second Amendment

The end of 2018 brought many things, including a lengthy government shutdown and more bids for the 2020 presidential election, but also a startling statistic about gun violence: there were nearly as many mass shootings in 2018 than there were days. In the wake of these shootings, and the start of a new year, it is only fitting that we spend our first Salon of 2019 discussing the topic that continues to polarize politicians and constituents alike: the second amendment.

This Salon will explore the second amendement—its history, place in modern times, and why citizens and politicians, who mourn the losses from these shootings, have struggled to implement a solution.

Reading and lecture by Roxanne Dunbar-Ortiz, author of Loaded: A Disarming History of the Second Amendment

Repeal The Second Amendment? That's Not So Simple. Here's What It Would Take, NRP.

There have been 307 mass shootings in the US so far in 2018 — here's the full list, Business Insider.

The Gun-Control Debate After Parkland, The New Yorker.

The Second Amendment is a human right — ignorance toward it is troubling, The Hill.