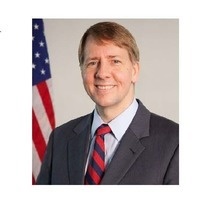 HIs upcoming book -Watchdog - is the story of how the Consumer Financial Protection Bureau became a major force for fairness in the marketplace and good government.