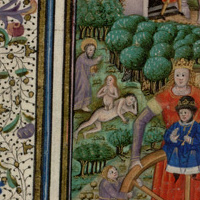 "Shakespeare/Example: The Time of Action"

This talk considers the logical form and ontology of the example. Bradin Cormack will be attending both to Shakespeare’s engagement with Plutarch in the Roman plays, especially Antony and Cleopatra, and to Macbeth, as that play’s companion and a meditation on the relation of action to processes of self-exemplification.

Bradin Cormack is Professor of English at Princeton University and author of A Power to Do Justice: Jurisdiction, English Literature, and the Rise of Common Law, 1509-1625. He is co-author, with Carla Mazzio, of Book Use, Book Theory, and co-editor of The Forms of Renaissance Thought and Shakespeare and the Law. He is currently finishing work on two books, a study of the philosophical cultures of Shakespeare’s sonnets and a study of the example form in literature and philosophy.